Mondays are usually all about #manimonday, but seeing as I don’t have a new design on my nails this week, I thought I’d continue with another blog post about me because I can’t just drop a bombshell about my disability and then not explain it.

It’s a pretty long story (21 years long), so I’ll try to keep it short. Basically, at 18 months old, I was diagnosed with Nemaline Rod Muscular Myopathy (Nemaline Myopathy or NM for short). There are different degrees of severity, from babies than don’t survive long after birth to adults that are just a little bit weak. I’m considered to be a moderate case. It must be noted too, that myopathy is different from other common conditions that you might have heard of, such as muscular dystrophy. Dystrophy means that the condition gets worse over time, while a myopathy doesn’t. It may appear that people with a myopathy deteriorate, for example, I don’t walk as much now compared to when I was little, but it’s simply because as I’ve gotten older and bigger there is more of my muscles to cope with.

Without using big medical words, there is rod-like structures in my muscles which stop them from working properly. Some muscles are also affected more than others, though that is completely random. It mainly affects my limb, trunk and facial muscles, which leads to other things such as scoliosis (curvature of the spine) and not so clear speech (hence I’m not a vlogger because one, I sound like Darth Vader on my ventilator and two, because I would need to put subtitles on all my videos).

One thing that NM absolutely doesn’t affect is my brain and intelligence! Too often abled bodied people (those who don’t have a disability) assume that just because I’m in a wheelchair means I have the intellectual capacity of a 5-year-old (haha well maybe not that exact age, but it’s close enough). This is 100% not true and one of the aims of this blog is to break down this and many other stereotypes that come with having a physical disability! It has actually been discovered that many people with NM have higher intelligence than others. Research hasn’t found out why, but it could be because we can’t excel in physical activities (e.g. sport at school) so we spend our time focusing on the academics. I, myself, am in the top one per cent of undergraduates at Curtin University (where I’m studying) and received numerous awards at high school.

You could say my parents didn’t win the genetic lottery. They’re both carriers of the NEB gene (a gene that causes NM), so they had to have met someone else with the gene and then be unlucky for it to be passed on, with my non-identical twin sister and I both having it. So in that sense, we’re pretty rare, with roughly just 30 cases in Australia and just 4 in WA, with my sister and I being 2. Hospital visits are usually quite funny because we often know more about our condition than the doctors do. Lesson learnt for everyone though, trust your gut because it’s often right when it comes to medical situations (haha except if you’ve Dr Googled, don’t trust that!).

But why the title “The Sexy Elephant Look” I hear you say. Well, besides it being an attention-grabbing title, when you see/met me you’ll notice two things that are different about me. The first is my purple electric wheelchair, which means yes I’m a very good driver, having driven one since I was 5 years old and no I don’t race or do burnouts in my chair (a few common comments from able bodied people there). The second is the mask that I wear on my face. It’s hooked up to my ventilator (a VPAP or what I commonly called my machine), which you’ll find sitting on the back of my chair. It pushes just plain air (no oxygen) into my lungs which means I don’t have to work as hard (you can tell I’m working hard as I have a “rocking” motion to breathe when I’m not on my VPAP) as NM also affects my diaphragm (plus there’s are a few more medical reasons why my lungs aren’t as strong). The term “elephant” came about as a young family friend called the hose a trunk and I just had the sexy part because it’s funny. You often don’t think of elephants as being sexy so it’s kind of ironic too. While my mask isn’t always my favourite accessory (give me a good handbag any day) or the “sexy elephant” look my favourite, it sure does make my life easier!

So, I say embrace who you are and don’t let anymore underestimate you! #selfconfidencefromwithin 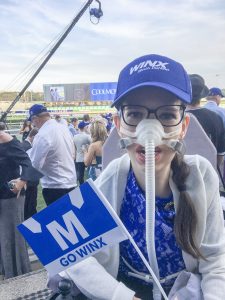 Entering Fashions on the Field in a Wheelchair

Portrayal of physical disabilities in television and movies

Amy Evans is the owner and writer at The Velvet Court. When she’s not at university studying marketing and advertising, she’s at the race track cheering home her horses..